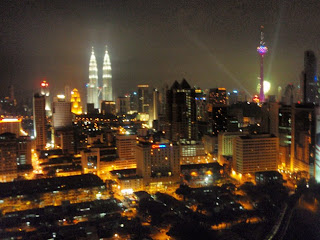 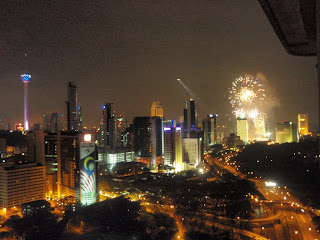 Email ThisBlogThis!Share to TwitterShare to FacebookShare to Pinterest
Labels: wishes

No, the baby is not here yet! That has been my line instead of the usual Hello when I answered any calls today. Woke up early this morning for my appointment with Dr Aziz, my gynea. For the first time ever, we reached the clinic at 8ish ;p After the pelvic exam, Dr Aziz told us that my cervix is softer than last 2 weeks but the baby doesn't seem to engage yet. So, he suggested for me to go for induction on Monday night and hopefully the baby would come out on Tuesday morning. Praying hard that all goes well and I do not need to have a C-sect.

After a late breakfast, my family and I went to the Curve. It was raining and the traffic was really bad. Had a lousy lunch at Marche. My lamb chop was almost burnt while Syah's lamb chop was still bleeding. Urghh.. Then we went to Ikea and back to the Curve. Abah wanted to restock his cigars but there was no cigar shop around so we went to KLCC and had another round of walkathon. Huhuhuhu.. With the amount of walk I had today, the baby should have come out! But nooooo.. He still insisted to stay longer.. Huuhuhu... Come on baby! Come out!!!!

Pray for me guys!

p/s: Thanx Aunty Ana n Cik Man for the baby rocker! We love it! It matches our car seat n stroller :p
Posted by mommy kam at 9:52 PM No comments:

Today is our first ever anniversary. Dedicating 'our song' to my beloved wifey,


I wanna know
who ever told you I was letting go
the only joy that I have ever known
girl, they're lying

just look around
and all of the people that we used to know
have just given up, they wanna let it go
but we're still trying 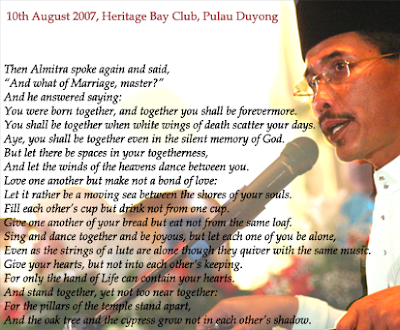 Marriage by Khalil Gibran
The poem was recited by Abah last year. I remembered my wife tried so hard to control her tears (bukan control macho, control takut kena makeup~) 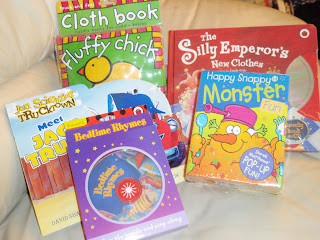 Went to Kinokuniya during lunch on Friday. Can't resist all the books! After much argument with myself, ended buying these ONLY. Hahahah! My baby is sooo going to be a geek :p
Posted by mommy kam at 12:50 PM 9 comments: