When we woke up on Saturday morning, Adam was having a fever. Thinking it was his molar teeth sprouting out, I just gave him paracetamol every 4 hours. That night, he woke up in the middle of the night with a rather high temperature. Still assuming it's his teeth, I just gave him rectal supp and tepid sponged him. I switched on the laptop and let him watched Ice Age 3 to sleep.

On Sunday, Adam still had his fever. He was very cranky and I noticed he has a foul smell breath. I was thinking "takkan kecik-kecik lagi dah ada gigi rosak".. I looked into his mouth and saw no rotten tooth.. His upper gum was still swollen. Very swollen. So, I still presumed that his fever was due to the molars. I still continued giving him his paracetamol 4 hourly.

Monday morning came. Adam woke up very early and he was very uncomfortable. Even Pocoyo could not make him quiet. His body was very hot. At 7am, I decided to give him a bath to reduce the temperature as tepid sponge didn't seem to work.

Later in the morning, I brought him to the clinic. Our favourite Dr Nik Suzet was on leave and a locum was there instead. He asked me many questions and was surprised to know that I had done all the things I should have done. Duh! Parents do read ok. As Adam's temperature was more than 39c, he gave a rectal supp to Adam. This doctor is quite young. He didn't seem to be experienced enough in handling children. Never before had Adam screamed and cried as much as he did this morning. The locum didn't seem to know what was wrong with Adam since he did not have any cough, runny nose or ear inflammation. So, he referred Adam to the specialist for blood test. 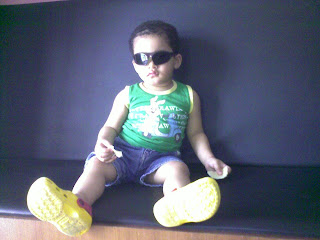 cranky Adam waiting for the doctor
I was worried it could be something  serious like dengue so I called my maid and asked her to pack Adam's stuff. I dropped by to pick up the bag and went straight to KPJ Selangor to see Dr Ling. I was prepared for any possibilities because I know human don't just have a fever without any reason. From my little knowledge, I know that when our immune system is fighting with virus or bacteria or whatever, our body temperature will increase at the same time. And 3 days of high fever was not a good sign.

Dr Ling was as nice as ever. He was very gentle with Adam and Adam did not even cry when he tried to look into Adam's ears to rule out ear infection. When he checked Adam's throat, he told me not to worry as Adam just had some tonsil infection. He prescribed an antibiotic and gave paracetamol to reduce Adam's fever. It was such a relief. I know tonsillitis is still a serious illness but it is much less worrying than dengue.

So, in conclusion, these are the symptoms and what you can do to take care of your child with tonsillitis.. 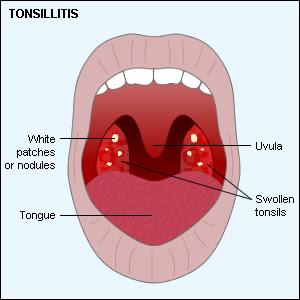 picture googled :)
If you need to know more, you can refer to these pages:
The information given are almost similar in all the pages. If you are still unsure, just bring your child to see your family doctor. They know better. Take care!
Posted by mommy kam at 8:06 PM