I followed my friends to Atria for lunch. Was not feeling well so opted for KFC. I don't know why but when I am sick, I always crave for Zinger burger. 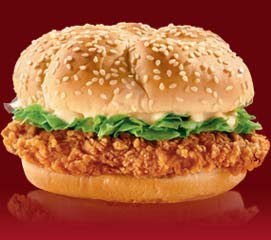 I was told they only have Zinger Tower burger. Thinking that it would be the same yummy Zinger burger with some extra piece of chicken I said OK. Then my friend told me they added a piece of hashbrown to make it a tower. OK, I can still accept that. So I just ate the bottom half first (the hash brown, cheese n bun), saving the best for last. To my horror, it tasted totally different! 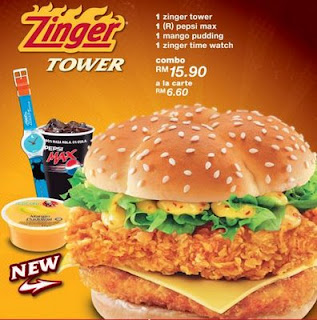 It's a little sweet to my liking. I just don't like it. This is what I get from Sun2Surf.

The sauce is just, urrgghhh.. Why oh why did you take away my  Zinger and gave me this yucky thing instead.. The taste of the lime sauce still lingers in my mouth.. urrghhh.. I read somewhere that the promotion is for 2 months only. Dear Colonel Sanders, please return my favourite Zinger burger!
Posted by mommy kam at 5:25 PM