1. Adam was hospitalized
Adam was hospitalized for a week for acute bronchitis. A follow up check done a week later showed that the phlegm was back without the nebulizer. So, Adam had to use inhaler (ventolin and ape tah lagi satu) at home :( As Adam is a big boy now (weighing 10.5kg and 80cm tall), we really had to wrestle with him whenever it's time for the inhaler.. huhuhu.. Anyway, here are some of Adam's pics in the hospital.. 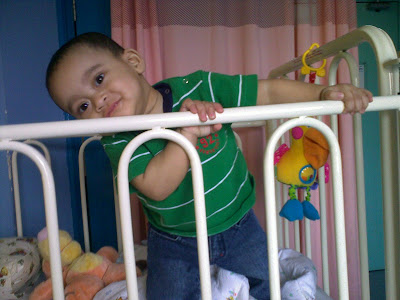 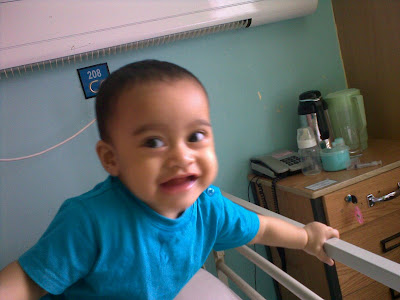 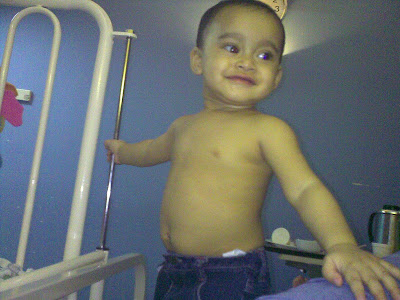 2. Adam can walk!
Just a few steps though. The most he walked that I have seen was 7 steps. So, I guess Annie won't have the chance to watch Adam crawling around. By the time you are back in end July, I bet Adam is already running around the house! ;p (Tue la sape suruh niat nak kick Adam's ass masa dia merangkak.. sebab tu Tuhan bagi Adam jalan cepat2 :p)

5. Groceries shopping
I wonder what is the average groceries expenditure for a family with 3 adults and a baby at home. Hmmmm.. all the while Mr Hubby n me x pernah buat budget properly for this. So, from 23/5 hari tu, I started to collect the groceries bill and it came up to quite a huge sum and it wasn't even 23/6 yet! The bulk of the bill went to Adam's necessities actually. His milk and diapers alone were already half of the amount spent so far. With the economics and our own tight cash flow, maybe we should start to skim down some of the stuff that we used to spend on. Cut the luxuries and stick to the necessities. Hmmm.. I guess being a parent is not as simple as I thought it would be. Having a child took up a lot of your resources - energy, time, money. But to be able to see your son smiles at you when he wakes up in the morning, to have him runs (or crawls) to you as fast as he could when he is scared, to feel him snuggling to you when he wants to sleep, every penny spent, every energy drained and every second passed are worth it. Seriously, a child is the best gift one could ever have. :D 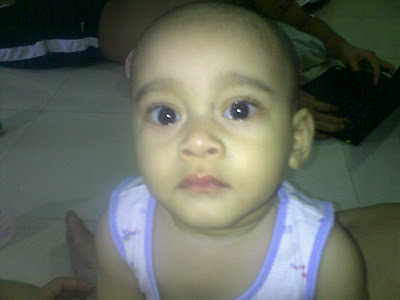 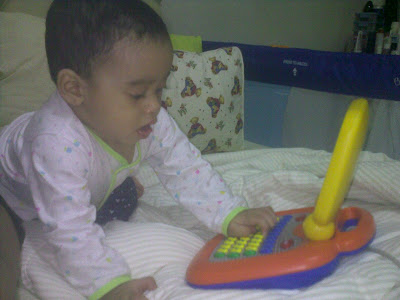