a little bit of everything 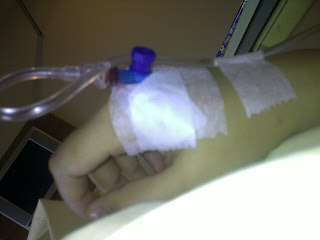 Had a very high fever and severe headache for a couple of days recently.. The headache didn't go away even after I took ponstant. It was really terrible. I was vomitting every time I was awake and didn't feel like eating anything at all though I was not fasting. Scared of the epidemic, I went to the doctor again and was referred to SMC. I was admitted as I looked like I can't even walk or sit at all. I was dehydrated as well. The nurses took my blood sample and later found I was negative for both viral and dengue. Alhamdulillah.. Though the fever was already gone, the headache was still there. So I was sent for an MRI scan.. Alhamdulillah everything was OK.. Then what the hell is wrong with my head? With all the tests cleared, Dr Hamidah became Dr House and tried prescribing a migraine pill for me and it works! Though the headache wasn't completely gone but it has reduced to a certain level where I can tolerate noise again.. The first few days I can't even stand listening to Adam crying in the background when I was talking to my mom on the phone.. Bingit sangat rasa.. After 3 days and 2 nights in the hospital, I was discharged and was given MC till Tuesday. Yippee!!!
Nyway, the Single Standard room were fully occupied so I upgraded for a better room for only RM10.50 per night. Yeay!! Here are some pics of the room.. Nice ain't  it? :) 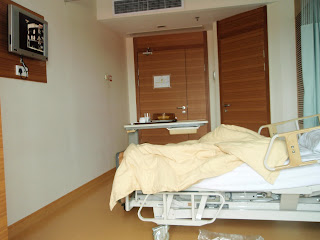 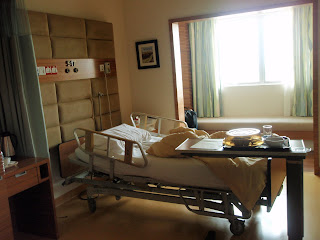 Iftar with my dormates
We had an Iftar at Ole-ole Bali at Sunway Pyramid. The food was ok but the companions were great! Though some could not make it, spending tym with Phylla, Rabby and Shikin was enough to bring me back to the happy schooling time. Not that I am saying I am not happy now. But it was a different kind of happy. Shikin came with Jay and Imran. Imran was sooooo adorable and very active. He ran here and there without tired. Made me scared thinking of how Adam would be when he is 3.. Nyway, here is the pic.. Imran really loves it when I carried him like that. He even came to me and asked to be carried again after that.. What a cheeky boy he is.. 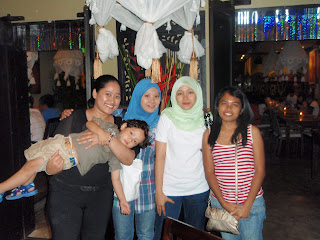 What to Expect the series
When I was pregnant, I was introudced to the first book in the series, What to Expect When You Are Expecting. I really love it! It explained everything really well. They must be mothers themselves :) After giving birth to Adam, I continued with What to Expect the First Year. It was a really good buy. I referred to it more than I refer to my mom - which irritates her of course :) It has everything from what you should expect from the child, what to feed them, how much to feed them and all kind of symptoms that usually alarms first time mothers like me though it was actually harmless.. And now that Adam is already a toddler, I have upgraded myself to What to Expect the Toddler Years. 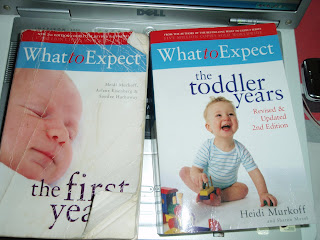 This book has been my companion since and maybe will stay that way untill Adam is 3 or until when I can call myself an experience mother :) So guys, if you need to buy something for a friend who's expecting or had just delivered a baby, the books in the series would be a very great gift. Even the price is not bad.. If I am not mistaken, it only costs RM44 each which is cheap if you compared to other books and worth every single sen compared to all other nonsense presents. And of course, one must love to read coz the book is quite thick and might scare away some non-reader.. Anyhoo, have a great day!
Posted by mommy kam at 6:44 AM