After work I rushed to Klinik Nik Suzet in Shah Alam to get the second Tetanus jab. After waiting for about half an hour, my name was called to see the doctor. I told her that she asked me to come and see her at the end of July to get my second jab. She checked my record and screamed OMG! You are supposed to come and see me at the end of June not July dear.. Oh my! She said tomorrow I will be 36 weeks so it is too late to continue with the jab. She asked me not to worry and just pray for the best. Huhuhuhu.. I have yet to google on the consequences of missing the Tetanus jab. Hmm.. should I worry?

Right after I got out from the clinic, hubby called and asked me to buy iced Milo for him. He was already on the way back to our Shah Alam home. I told him I was about to go to Giant right away so he was a bit merajuk and told me he'll get his own Milo then.. I said OK and went into the car. When I started the engine, the alarm went off! Must be the battery again. So had to call hubby to rescue me.. Luckily he was just nearby and had already bought the new battery on his way.. hmm.. akibat derhaka agaknye nie... huhuuh.. the next time hubby asked me to buy Milo, I definitely won't say No anymore!

Introducing my hubby the superhero :p 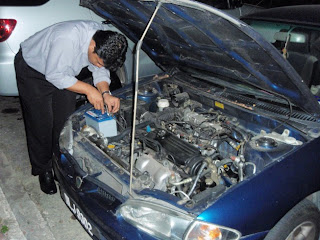