This morning, hubby greeted me with a tough question..
"If you are in a labor and I had to chose between you and baby, whom should I pick?"
"Whatt??!" I was dumbfounded. I had never given this a thought before.
Hubby said it was just a random thought. And he said he would pick the baby.
"Why?"
"So that you can die as a shaheed and will go straight to heaven" said husband with a smile.
"Kalau x belum tentu lagi masuk syurga sebab ayang degil" added him with a bigger smile. Chet!
"But if I were to have the option to die as a shaheed, I will chose it" he added with a serious note.

I hope we would never have to face this. Call me selfish but frankly, my first thought was for him to pick me. I could give birth to more babies if that is what we want. And even if we cannot have a child anymore after that, we already have Adam. And what if we already have a few children who are still very small and need their Mommy. Who would take care of them? Of course my family will give their full support and hubby could even get them a new mommy but it won't be the same right? The sadness and emotional impact on them for losing their Mommy might not be cured forever. And it could impacted more lives than it would be if the baby is the one who sacrifice for his/her Mommy. I mean, we barely know the baby.

Having said these, I haven't really make up my mind. What if I could never get rid of the guilt that will haunt me forever for being so selfish? I don't think I have the heart to live with that. It will eat me alive. Let us just pray I (and all of us) would never have to make this kind of decision.

On another note, have you thought of organ donation? I have been toying with the idea for quite sometime. Initially, just like the above, I was too selfish to give up my organs even if I am already dead. After given it more thought and read all those articles written by Muslim scholars, I felt more open to the idea. As what we read in the media, even if I have the donor card, my family are the ones who own my body upon my death. So, I need to get their blessings first.

Couple of months back, I popped the question to hubby. What does he think about organ donation? He is positive about it and has no objection to it. I haven't bring up the subject to my parents though.

Though it has been quite some time since I first thought about this, I haven't had the time (or courage) to actually go and sign up for it. Let us make this as one of my to-do list this year so by end of the year, my name would be written on one of this: 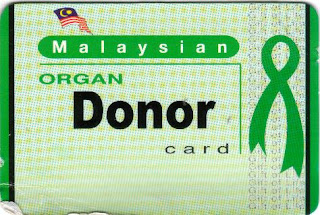 So what do you think of both issues?

P/s: For more information on organ donation in Malaysia, the process and the likes, you can visit Malaysian Society of Transplantation website.
Posted by mommy kam at 12:10 PM

Thanks for sharing liz.. Appreciate it.. :)

dah sign up since campus days...but haven't talked to parents yet..knowing them, i know they would agree with my wishes when the time comes, however, untuk menjaga perasaan, in any case, i pledged for internal organs only, not skin or anything on the outer side..ntah kenapa..but that's what i did..perhaps one day, i'd tell my family for real..

good for u! oh yeah.. i haven't consider which part to donate yet.. will decide and act on it.. sooon :)